I can’t tell you why the donor ever decided to get double box springs for the Queen sized bed he purchased back in the summer of 2006. It was a Queen sized bed. A Queen. Not a King. Not a California King. A Queen. We weren’t sleeping in some vast luxury bed needing the latest in bed frame technology so as to give you the best night’s sleep possible. It was a simple Queen sized bed, a cheap one at that. After 6 months of use it formed a large mountain in the middle  causing the donor to sleep on one side and me on the other. Much to his dismay, no amount of turning the mattress would remedy the ever-increasing mountain in the center of the mattress.

I vaguely remember the day the mattress was delivered to his small apartment in south Jersey. I’m pretty sure my pregnancy hormones got the best of me as I questioned him up and down about why on earth he would order a double box spring for such a small bed. I’m sure his explanation had something to do with being easy to move or being on sale or both, but I have since forgotten. All I know is that I still curse the day those damn box springs showed up. For a while I was convinced I didn’t like them at first because I wasn’t a huge fan of the donor at the time of the purchase. Maybe there was some sort of karma thingy clinging to the wood a fabric just to spite my petty feelings of him at the time. Although the whole karma thingy may still be partially to blame for the hell these box springs have put me through, I am now mostly convinced it’s just double box springs are unnecessary for such a small bed and flat-out suck. If I were ever buy a king sized, or bigger, bed I would be more inclined to take out an entire wall of my bedroom before buying double box springs again.

Shortly after BF came into my life I decided I actually liked sleeping net to someone and thought maybe it were in  our best interest to get a new mattress, one that actually allowed us to *gasp* cuddle after sex. I had a bonus from work come through and I bought us an early Christmas present. Brand new top of the line Queen sized mattress…and that was the end of the mattress budget, a new box spring would have to wait. After wrestling the old beast down the stairs and out the front door and cursing our way back up the stairs with what we were sure to view as heaven. And it was. So soft was the pillow top as it engulfed us both in its fluffy embrace. We both smiled as we envisioned joyful mornings after sleeping in heaven all night. As we crawled into bed that night we gave it a test run, a good one. So far the new mattress was perfect. By morning it was a different story. I was exhausted and things are still a bit hazy in the memory department but I’m pretty sure flames were shooting from BF’s eyes as he asked me what happened during the night.

We had woken up in what was nothing like the soft embrace we had felt the afternoon prior. Instead it was as if Satan had come in during the night and folded us in a hell taco that resembled our new mattress. The middle had sunken in beyond what one would consider normal. After we calmed down we decided to give it another try, but the next morning it was the exact same thing. Our backs hurt. Our limbs hurt. We had been folded into Satan’s hell taco once again. What on Earth was going on? Then it hit me. The donor’s  double box springs! The overall weight of the new mattress was just enough to not cause the mountain as with the last one, but a hell taco/sagging middle. I cursed into the air swearing if the donor still lived down the street I would have driven to his house and shoved one box spring down his throat and the other up his ass, and then sell my first-born so I would have the money to go buy a new box spring. Alas, he no longer lived down the street and I do have quite a growing affection for my first-born .

There we were, BF and I, stuck with the double box springs and a hell taco. So we came up with a plane, BF was pretty sure there was a large piece of plywood at work he could bring home to hopefully keep Satan at bay. That night we slid the plywood between the mattress and box springs, because it was not as big as BF had thought, crossed our fingers and hoped for the best. the next morning the hell taco wasn’t nearly as bad as it had been but we could still feel the tug of Satan from the hell fires below. That night BF brought home 3 very long 2×4’s to stick under the box springs. All of his tools were at a side job so we didn’t have a saw to trim the boards to the appropriate length. Naturally the double box spring and mattress sat 2 inches above the bed frame for almost 6 months but at least we no longer woke up in a hell taco.

A few weeks ago a saw made its way into our house and sat silently in the laundry room on top of a box of Borax and some extension cords. It wasn’t until we decided to clean out our room that we decided to go ahead and cut the 3 boards jetting out at shin height so that they would set nicely into the bed frame as nature had intended. BF grinned from ear to ear as he cut each board covering the floor in saw dust. Saw dust we could handle. Hell tacos we could not. As we had hoped, each board fit nicely in the frame as did the box springs and mattress. That night we climbed in patting ourselves on the back for  finishing this project. As we both put our weight onto the mattress there was a deafening noise! WTF was that? We shifted our body weight to try to glance under us where the noise was coming from. There is was again! It was almost as if the bed were yelling at us. Yelling at us in a blood curdling scream.

We held as still as possible figuring the noise was the wood rubbing on the metal frame. We could deal with this for a night. But we were horny. So now what? Do we go back downstairs to the couch for a quick romp or just stay in bed and test it out. Naturally we stayed in bed. It was horrible. I couldn’t concentrate on my rhythm. All I heard was that damn noise. Frustrated we tried another position. And another. And another. Fail. Fail. Fail. Somehow we managed to finish but it was by no means as enjoyable as our earlier elation should have resulted in. The next night it was the same thing. There had to be some way to make it stop. There had to be!

My parents had planned on coming to visit the next weekend. They were planning on staying in a hotel and we were sure to find a way to silence the noise before then anyway. The day before they came I was informed they had changed their minds, they were going to stay with us. Shit. We hadn’t done anything to fix the bed. Now what? So I cut up and old sweater to place between the boards and the bed frame. BF had since done some investigating into the noise and informed me it wasn’t the wood making the noise, it was the bed frame itself. I didn’t care. I had to put the sweater pieces in there just to make myself feel better. Maybe he was wrong . Maybe it would at least help.

But no. No, it didn’t. Maybe it was paranoia but I think it made it worse. This was Satan’s way of getting back at us for nixing the hell taco. He and the donor must have been in contact with each other about the double box spring and this is how they were getting back at me. The entire weekend was spent trying to move as little as possible in bed so my slumbering parents below wouldn’t think we were having endless sex marathons all weekend. We move and the sound wakes us up. We sneeze and the sound shoots us out of bed. Tonight I may actually rub butter all over the bed frame in a last resort attempt at getting the noise to stop. If it doesn’t work I’m convinced we may never be able to have se in our bed again. 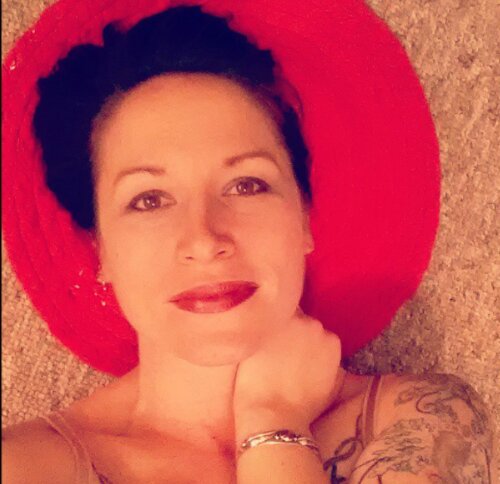